The exclusive COVID-19 impact analysis report by Axiom MRC provides a 360-degree analysis of micro and macro-economic factors in the NA Battery Separator Films market. In addition, complete analysis of changes in the NA Battery Separator Films market expenditure, and economic and international policies on the supply and demand side. The report also studies the impact of pandemics on NA economies, international trade, business investments, GDP, and marketing strategies of key players present in the market. The ongoing pandemic caused by the outbreak of COVID-19 disease is hampering industry growth. A decline in the production of automobiles and alleviated consumer buying power led to the downfall of the automotive industry, which, in turn, negatively impacted the battery separator industry.

The NA Battery Separator Films market is driven by increasing product demand in consumer electronics. The battery separator film is a major component of every Li-ion battery, which is placed between the cathode and anode and divides those two electrodes from each other to avoid internal short circuits. Therefore, the separator film plays a vital role, when it comes to battery reliability and safety. In the electronic application segment, battery separator films are widely used in applications such as laptops, computers, mobile phones, tablet pcs, cameras, and other portable electronic devices.

The market has major restraining factors like Safety Issues Related to Batteries. Safety issues related to usage, storage, and transportation of batteries are a major restraining factor that could hamper the market growth. Lithium-ion batteries (LIBs) with outstanding performance are extensively used in electric vehicles (EVs) and portable electronics, but frequent explosions and fires limit their more widespread applications. Lithium-ion battery fire hazards are related to the high energy densities together with the flammable organic electrolyte is the factor restraining the market growth.

The report provides an in-depth analysis of the NA Battery Separator Films market, market size, and compound annual growth rate (CAGR) for the forecast period of 2022-2028, considering 2021 as the base year. With the increasing demand for various Battery Separator Films in various applications has led to the increasing demand for the market and is expected to witness growth at a CAGR at specific CAGR from 2021-2028. 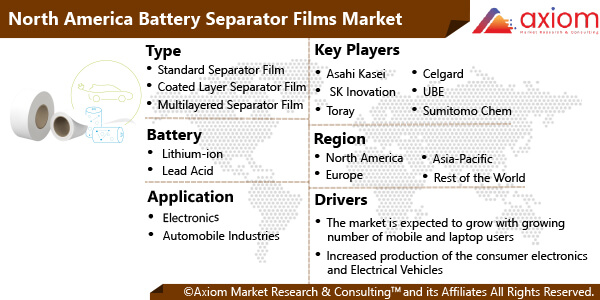 The automobile industry is dominating the market for the battery separator film market. Increasing production and sales of electric vehicles across the globe are the major driving factor behind the market growth. Furthermore, the United States is among the countries leading in NA EV sales, along with other economies like Canada, China, and Japan, which have already begun transforming their public transportation infrastructure to electric. However, automobile manufacturing plants produced and delivered very few automobiles owing to the NA supply chain disruptions resulting from lockdowns. This can impact the growth of the battery separator films market during the pandemic period.

The United States is anticipated to witness increasing demand for Battery Separator Films owing to the presence of well-established market players. The segment growth is underpinned by factors, such as robust demand for lithium-ion batteries from the automotive industry in conjunction with the shifting preference of consumers towards electric vehicles owing primarily due to the rising concern over greenhouse gas emissions. Moreover, technological advancements have led to the development of lighter lithium-ion batteries in recent years. The growing need for vehicle weight reduction to improve fuel efficiency and mitigate carbon emission makes the technologically advanced li-ion batteries a desirable choice for vehicle manufacturers.

September 2021: ENTEK International disclosed that it has completed its acquisition of NSG’s Battery Separator Division (BSD), The complementary combination of manufacturing footprints and product portfolios will enable ENTEK to support customers around the world with outstanding service as well as the industry’s premier offering of separator products for energy storage.

What are the drivers for the Battery Separator Films market?

The key driving factor of the market is the growing demand for electric vehicles.

Which is the leading application segment for the Battery Separator Films market?

Automotive Industries have accounted for the major market share, and I expected to witness growth at the highest pace during the forecast period.

Which region is gaining the majority y of market share during the forecast period (2021-20The 28)?

The United States is expected to gain major market share during the forecast period (2021-2028).