An electric vehicle functions on electricity unlike its counterpart, which runs on fuel. Rather than internal combustion engine, these vehicles run on an electric motor which involves constant supply of energy from batteries. There are a variety of batteries used in these vehicles. Electric vehicles were principally intended to replace conventional ways of travel as they result in environmental pollution. Today, electric vehicles have gained attraction due to several technological advancements.

The electric car market is growing quickly, with more than 128,500 pure-electric cars on UK roads at the end of May 2020 - and over 315,000 plug-in models including plug-in hybrids (PHEVs). The most recent set of figures from the Society of Motor Manufacturers and Traders (SMMT) show that pure-electric models accounted for 6% of total new car registrations, whilst adding in PHEVs takes that figure up to 10%.

Electric vehicles utilize one or more than one electric motors or traction motors for propulsion. These vehicles are motorized either by a collector system through electricity from charging station deployments or can be charged by self-charging devices such as regenerative braking systems and turbochargers.

Technological advancements are anticipated to gain attraction together with the increasing sale of electric vehicles over the forecast period. The sustained rollout of integrated charging stations and the institution of green power-generation capability is also likely to provide supplementary stimulus to the market growth. Moreover, the tactical alliances between e-mobility providers, battery manufacturers, and energy suppliers are also projected to boost the market growth. Moreover, manufacturers are also chasing technological innovations to guarantee powerful propulsion for their electric vehicles. 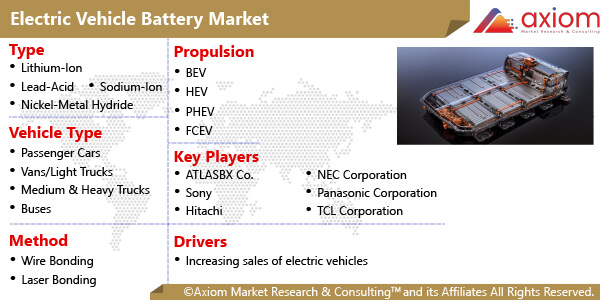 The various types of batteries include lead-acid, lithium-ion, nickel-metal hydride, sodium-ion, and others. However, the lithium-ion batteries are anticipated to dominate the market over the forecast period. Lithium-ion batteries are used in applications that need lighter weights and higher energy density. These batteries provide a high energy density per weight and are thus used extensively in automotive applications including electric and hybrid automobiles. Suitable availability of EV charging infrastructure remains vital for the rollout of e-mobility and bodes well for the growth of the lithium-ion battery sales.

By propulsion, the market is classified into battery electric vehicle (BEV) and plug-in hybrid electric vehicle. The BEV segment dominated the market in 2019 and is likely to continue its dominance over the forecast period. However, the PHEV segment is projected to be growing swiftly by 2026. The BEV segment is particularly expected to gain high traction in emerging economies owing to the fuel economy regulations.

Geographically, the study is comprised of the key countries of North America, Europe, Asia-Pacific and Rest of the World. The Asia Pacific region is likely to hold majority share of the market as countries such as China, India, and South Korea, have been noticing a increased electric vehicle battery demand over the past few years linked with the rising preference for electric vehicles. However, the existence of major market players such as Tesla and Ford is likely to move the market for the electric vehicles battery in Europe and North America. Furthermore, the constant development of electric cars is strengthening competition among market players to provide better and cost-effective solutions.

The study analyses Global Electric Vehicles Battery market based on Type, Vehicle Type, Propulsion and Geography. The various types of batteries include lead-acid, lithium-ion, nickel-metal hydride, sodium-ion, and others. Based on the type of vehicles, the market is classified into passenger vehicles and commercial vehicles. The passenger vehicles segment is anticipated to dominate the market over the estimated timeframe. By propulsion, the market is classified into battery electric vehicle (BEV) and plug-in hybrid electric vehicle. Geographically, the study is comprised of the key countries of North America, Europe, Asia-Pacific and Rest of the World. The Asia Pacific region is likely to hold majority share of the market.