There is an expansion within the number of millionaires and thus the millennial population has exhibited a fine taste for luxury products within the foregoing few years. Luxury footwear is a blend of unique style and elegance. This footwear has been characterized by enhanced qualities such as material, durability, and luxury. Luxury footwear can be customized as per the requirement of the customer. Innovative designs and textures positively influence the expansion of the posh footwear market.

Luxury formal footwear is designed to display the professionalism of the consumer whereas luxury casual footwear is produced to abandon a winning look showcasing elegance. Athletic luxury shoes are particularly designed for sports and fitness-related movements. Formal and casual luxury footwear are often made of leather material whereas, athletic luxury footwear requires a combination of various textiles such as nylon, polyester, and lycra to make them lightweight and well-ventilated. Luxury footwear is out there in several distribution channels to cater to the rise in demand.

Luxury footwear demand has been mounting amongst the millennials. This footwear is delineated by improved qualities, such as material, durability, uniqueness, and comfort, which may be a notable determinant driving the market. Growing preference for attractive luxury footwear as a logo of status as well as the inclination of consumers towards flaunting various international brands, such as Louis Vuitton, Gucci, Chanel, Burberry, and Prada, are driving the product demand.

These brands have been adopting lucrative ways to attract different consumer classes, including HENRYs (High-Earners-Not–Rich-Yet), who are digital savvy and are big spenders. Companies endeavor inclusive, individualized, and self-expressive products to onboard this demographic that will propel the market growth.

The luxury footwear market is negatively affected by counterfeiting. International organizations in collusion with leading brands have introduced stringent rules and regulations to curb a well-entrenched system of counterfeiting; however, more efforts need to be made regionally and globally to stop the growth of the counterfeiting market.

The exclusive COVID 19 impact analysis report by Axiom MRC provides a 3600 analysis of micro and macro-economic factors on the luxury footwear market. Covid-19 has had a severe impact on the luxury footwear industry. Store closures owing to quarantine and lockdown measures have resulted in grim consequences, with sales decreasing considerably from January to April 2020. According to a report by World Footwear, sales of footwear declined by on the brink of 42% within the U.S at the top of the primary quarter of 2020. The pandemic disrupted production as well as sales of luxury footwear across many countries through both online and offline channels due to social distancing and stay home policies. Additionally, the pandemic situation has goaded people to spend more judiciously and avoid frivolous purchasing. People have been refraining from buying luxurious footwear, which is typically way too costlier than normal footwear. 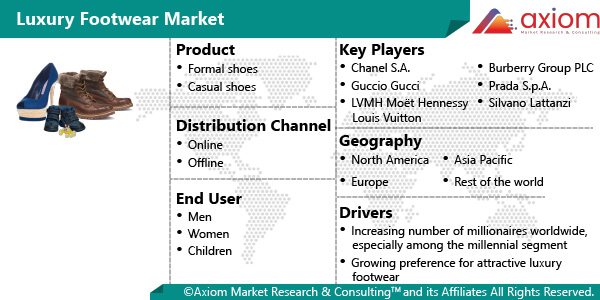 The Luxury Footwear market is segmented based on its product type, material, end user, distribution channel and geography.

The Luxury Footwear is available in the market according to different product type, it is segmented into the formal shoe, casual shoe, and athletic Formal shoe luxury footwear led the market and accounted for the largest share of the worldwide revenue. The rising importance of luxury footwear as a reflection of one’s professionalism at the workplace, particularly in corporate and fashion industries, is expected to remain a prominent factor augmenting the product demand. Growing demand for luxury footwear in this segment has led manufacturers to offer personalization options in the product.

Luxury Footwear is majorly categorized by material; it is bifurcated into leather and non-leather. The leather material segment is accounted to hold the largest market owing to some advantageous aspects such as Breathability, Durability, Water Resistance, and much more. Leather shoes are a popular favorite for people who have active jobs or need shoes that will give their feet extra comfort and protection.

Luxury Footwear based on end user, it is categorized into men, women, and kids. The women division led the market and accounted for the largest share of the global revenue. Increasing spending on designer and branded luxury footwear by millennials and the working-class population has fueled the growth of the market worldwide. The women segment is expected to maintain its lead over the forecast period owing to an increase in the number of women in the workforce. According to the data by the European Union, close to 46% of the workforce in the European Union’s 28 countries, including France, Germany, Greece, Hungary, Ireland, and Italy, comprised women.

Luxury Footwear is majorly distributed by brand store, specialty store, and online sale channel. Offline distribution channels dominated the market and accounted for the largest share of the global revenue. Brick and mortar stores including boutique shops and independent luxury footwear stores are popular among consumers. These shops are keen to acclimate to the fashion trends in the luxury products market and tend to offer exclusive deals to their customers, thereby boosting sales extension. Multi-brand luxury footwear shops are among other popular distribution channels. These stores enable shoppers to pick from various brands before making a purchase.

Geographically the global Luxury Footwear market is studied for the following region North America, Europe, Asia Pacific, Middle East & Africa, and the Rest of the World. North America dominated the market for luxury footwear and accounted for the largest share of the global revenue. The presence of a large number of wealthy individuals with high disposable income in this region has been one of the important factors driving the regional market. Accompanied by North America, Europe is prophesied to emerge as the second-largest regional marketplace for luxury footwear over the projection period. The demand for the commodity has been escalating owing to the immense concentration of buyers who favor luxury footwear with unique features and brand value in developed countries, including Germany, France, Italy, and the U.K.

The report analyses the luxury footwear market is segmented based on its product type, material, end user, distribution channel, and region. Based on product type, it is segmented into formal shoe, casual shoe, and athletic. Based on material, it is bifurcated into leather and non-leather. Based on end user, it is categorized into men, women, and kids. Based on distribution channel, it is classified into brand store, specialty store, and online sale channel. Geographically the global Luxury Footwear market is studied for the following region North America, Europe, Asia Pacific, Middle East & Africa and RoW.