Different types of sensors are used in an aircraft which are important for security and safety along with operational purposes. Modernized aircraft are implemented with various different sensors for regulating their operating parameters both in electronic control and engine health. Further sensors used in engine such as space sensor and propulsion is used for the purpose of critical measurement for engine control systems. Aircraft sensor offers reliable, efficient and cost-effective operation for commercial and military aircrafts. Manufacturing industries are involved in advanced sensor technology production along with innovative aircraft-wide measurements that improves the safety and performance in the toughest flight conditions. 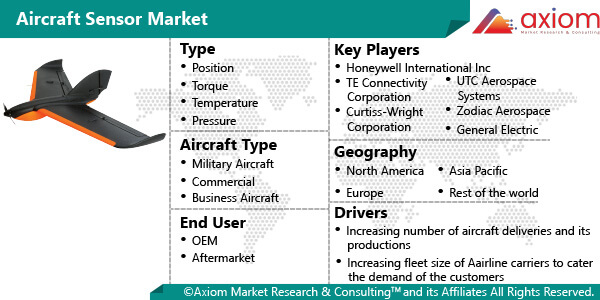 The report analyses the aircraft sensor market based on type, aircraft type, end-use and by geography.

By Type, the global aircraft sensor market is segmented into position, torque, temperature, pressure, flow, radar, accelerometer, proximity. Temperature segment accounts for the highest share in the aircraft sensor market. Temperature sensor account for the integral part of an aircraft. They are incorporated in different parts of the aircraft such as brakes, cabin, air ducts, hydraulic lines and inter-stage turbines. The manufacturers have to abide with the industry standards and regulations for commercialization purpose.

The aircraft sensor market on the basis of end-user industry is segmented into OEM and aftermarket.

Geographically, the aircraft sensor market is studied across the countries of key regions such as, North America, Europe, Asia Pacific and the rest of the world regions which includes Latin America, and Middle East & Africa. The aircraft sensor market is expected to grow above average scale in North America region due to increase in air travel and the presence of sensor manufacturers and prominent aircrafts in the region. This factor is responsible for the uplifting the growth of the market in the North America region. In Asia Pacific, China is one of the prominent players in the market which have their own large number of commercial aircrafts which in turn help in reducing the import cost, they also setup their own engine manufacturing plant which further increases the growth of the aircraft sensor market in APAC region.

The report analyses of the aircraft sensor market based on type, aircraft type, end-user and by geography.

The aircraft sensor market by aircraft type is segmented into military aircraft, commercial and business aircraft. Commercial and business aircraft plays a major role due to large number of travelers travelling worldwide. Increasing number of air passengers, basically from emerging economies is expected to show a significant impact on the commercial aviation industry market. Some of the major players operating in this market include Honeywell International Inc., TE Connectivity Corporation

Geographically, the Aircraft Sensor Market is studied across the countries of key regions such as, North America, Europe, Asia Pacific and the rest of the world regions which include Latin America, and Middle East & Africa.

Why to Buy This Report

• It presents a comprehensive assessment of geographical regions exhibiting promising growth, potential and niche segments, and a neutral perspective on the Aircraft Sensor Market performance

• The report also offers strategic recommendations in key business segments based on the market estimations and competitive landscape, mapping the key common trends of optical sorter