Major growth factors such as increasing urbanization and industrialization, rapid growth in the power generation and renewable energy market and surged demand for electricity in developing economies of APAC region are attributed to the growth of the Asia Pacific landfill gas market. Furthermore, the growing use of landfill gas for energy generation and the massive availability of municipal solid waste are further expected to improve the market growth in the coming years.

The exclusive COVID 19 impact analysis report by Axiom MRC provides a 3600 analysis of micro and macro-economic factors on the landfill gas market. In addition, complete analysis of changes on landfill gas market expenditure, economic and international policies on supply and demand side. The report also studies the impact of pandemic on Asia Pacific economies, international trade, business investments, GDP and marketing strategies of key players present in the market. 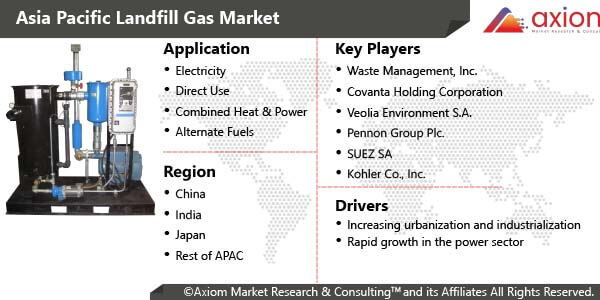 The study analyses Asia Pacific landfill gas market based on application and country.

Major applications of the Asia Pacific landfill gas market are electricity, direct use, combined heat & power, and alternate fuels. The electricity application segment is further bifurcated into internal combustion & reciprocating engines, gas turbines and micro turbines. The direct use and alternate fuel segments are again sub-segmented into boilers, direct thermal & lachate evaporation and others and pipeline fuels and vehicle fuels respectively. The electricity application segment dominated the market in 2020. Similarly, direct use and alternate fuels segments are also contributing to the market growth. Landfill gas can be upgraded to renewable natural gas, a High-Btu gas, over treatment processes by increasing its methane content and, on the contrary, decreasing its CO2, oxygen and nitrogen contents. Renewable natural gas can be used in place of fossil natural gas, as pipeline-quality gas, liquefied natural gas (LNG) or compressed natural gas (CNG). Approximately 13% of presently operating LFG energy projects are creating RNG.

Country wise, the study is comprised of the key countries such as China, India, Japan, and rest of Asia Pacific. The China followed by India held the largest market share of Asia Pacific landfill gas market and is likely to dominate the market over the estimated time frame. Rapid growth in the power sector of countries such as China and India is likely to propel market growth in the coming years. For instance, power sector in India is undergoing a noteworthy change that has redefined the outlook of the industry. Continuous demand for electricity is expected to drive the growth of the market in the country.

April 2021: Suez agrees to sell its recycling and recovery business in Australia to Melbourne-based Cleanaway for A$ 2.5 billion ($1.9 billion).

January 2017: Castle Peak Power Company Limited (CAPCO), announced an agreement between CAPCO and the West New Territories (WENT) Landfill contractor, a subsidiary of SUEZ, to support the Government’s strategy of helping renewable energy and waste-to-energy initiatives. Under this agreement CAPCO will install power generation units on the site which will utilize landfill gas as fuel.