The electronic instrumentations and sensor systems are the fastest growing and forthcoming segments in the semiconductor market. Sensors have various applications like electronics, industrial automation, military, mobile devices, building and infrastructure, security, transportation, communication, IT infrastructure and medical equipment among others. Sense and diagnose situations, make decisions and interact with the environment are the main functions of the intelligent sensor system. Snow and rain sensor is one type of rain sensor among all other numerous sensors types present in market. A rain sensor which is a switching device triggered by raindrops. Snow and Rain sensor is a qualitative measuring device that measures whether it rains or snows outdoors or in nature. It has high sensitivity and an internal automatic heating mode, which can effectively prevent measurement errors caused by freezing on the surface of the sensor in cold weather. The latest snow and rain sensors are working on the principle of total internal reflection in which an IR light signal is transmitted at an angle of 45-degree into the windshield from the interior for example if the glass is wet, less light reflected to the sensor, and the wipers turn on. For rain monitoring, the top of the rain and snow sensor uses grid electrodes to use the conductivity of water so that on rainfall, the electrodes will be short-circuited, making device detect rain.

The increasing production of the vehicle, continuous exponential demand for comfort and advancements in technology are the main driving factors of the speedy growth of the snow and rain sensor market. Also to support the automatic mode of windscreen wipers and to guard the interior of an automobile from rain are the one of the key application of the snow and rain sensor. With the rapid development in embedded systems, the designing of automated vehicles has increased, so the use of sensors in vehicle is increased. The growth of the industrial sector is one of the main driving factors that is responsible for the growth and development of the snow and rain sensor market worldwide. The modern Internet of Things (IoT) is following the surge of digitalization of innovation that builds up a scaffold amongst the physical and advanced world.

The Asia Pacific pandemic, COVID-19, has led to severe repercussion owing to its widespread effects across several economies. Several industries are facing unprecedented losses owing to the lockdown announced by several governments across the globe that has resulted in the complete shutdown of the businesses. The crippling economy, however, is being revived through collective efforts from the government as well as the industries and is expected to bounce back in the coming years. 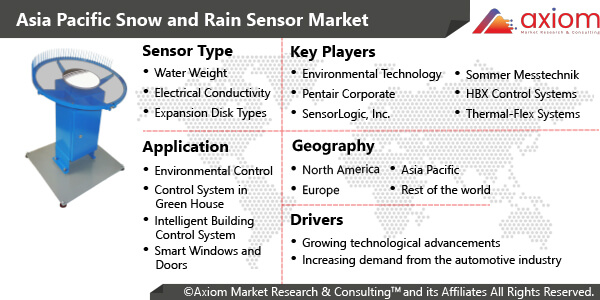 The report analyses the market for snow and rain sensors market segmented by sensors type, application, and geography.

According to the sensors type rain sensors are available in different designs, including water weight, electrical conductivity, expansion disk types and others. The water weight rain sensor uses a small dish attached to the irrigation system's main controller. As the dish fills with rainwater to a specific set point, the rain sensor will trigger the controller to shut the water valve off. The irrigation system will remain inoperable until the water in the dish naturally evaporates; this evaporation coincides with the soil's drying time. Once the water dissipates within the dish, the irrigation system will automatically turn back on for normal watering schedules. Electrical conductivity uses the same rainwater collection dish; but, the irrigation system is triggered into an off position when two electrodes contact the collected water level. These electrodes are an open circuit during dry weather. Once water reaches the electrodes' preset level in the dish, the circuit becomes closed and effectively shuts the irrigation system down. The irrigation system returns to its normal operations once the electrodes do not sense any more water. The third, and currently most popular type of rain sensor, discards the old catch basin. Hygroscopic disks, which are made of a synthetic material similar to cork, expand when wet. The wetter it gets, the more it expands. The expanded disk triggers the switch after a preset amount of rain has fallen. It continues to expand as more rain falls. The system will not resume scheduled cycles until the disk dries out and returns to normal size. The more rain that falls, the longer the sensor prevents watering. Other type of rain sensors include Snow and Rain sensors which can detect snow or rain. They read the temperature and decide when running water through the sprinkler pipes risks cracking them. These sensors are also among the more expensive.

The sensor market can be segregated into environmental control, control in green house, smart doors and windows, intelligent building control systems and transport routes. Environmental monitoring is needed to be able to protect the public and the environment from toxic contaminants and pathogens. It is used to prepare environmental impact assessments, as well establish the circumstances in which human activities carry a risk of harmful effects on the natural environment. Rain sensors are used in areas such as water conservation devices in irrigation systems, and in automobiles with windscreen wipers.

Rain sensors are also used with doors and windows, for eg a vehicle senses how much rain is on the windshield, speeding up the windshield wipers according to the amount of rain it detects. The sensor itself is mounted on a special bracket behind the vehicle’s rear view mirror and wired through the roof. The sensor detects the light reflected back internally by the windshield glass, so if there were more raindrops on the windshield, the less light would be reflected back to the sensor. Intelligent Building Control Systems are automated building systems that converge and integrate the many building technologies and information flow processes to a central decision point. It provides a framework to help decision makers assign a risk-based criticality or impact to their building and asks relevant security questions to develop appropriate mitigation strategies. With the growth of the Internet of Things (IoT), especially the use of sensors like rain sensors, it will continue to expand into more diverse and complex areas of everyday life.

Geographically, the market can be segmented into Asia Pacific further segmented into India, China, Japan and Rest of APAC. Countries in the Asia-Pacific region also show a great sign of development due to the population growth in this part of the world which will act as both consumers as well as labour. The economic growth of the emerging countries such as China and India will increase the demand for passenger cars in the coming years; this will induce global automobile manufacturers to invest heavily in technology and modern mass production systems, in turn, fuelling the demand for automotive rain sensing wiper systems. Moreover, increased investments in infrastructure development and industrialization that fuel the demand for commercial vehicles will also boost the market’s growth prospects in this region.

The key players for the sensor market in APAC segment include Renke, Chromalox, Pentair Corporate, Warmup, Sommer Messtechnik. Shandong Renke Control Technology Co.,Ltd.is a leading environmental monitoring high technology enterprise in China. Chromalox centered in Pennsylvania has presence on 6 continents, providing rapid service and support. Pentair Corporate centered in US also has presence in APAC, Europe and Middle East. Warmup, head quartered in Ireland, has presence in more than 30 countries all around the world. Sommer Messtechnik, centered in Austria, also has sales presence in North America and Asia Pacific along with Europe.

Snow and rain sensor is one type of rain sensor among all other numerous sensors types present in market. It is a qualitative measuring device that measures whether it rains or snows outdoors or in nature. The increasing production of the vehicle, continuous exponential demand for comfort and advancements in technology are the main driving factors of the speedy growth of the snow and rain sensor market. Based on the sensors type rain sensors can be segmented into water weight, electrical conductivity, expansion disk types and others which includes the snow and rain sensor. The sensor market can be segregated into environmental control, control in green house, smart doors and windows, intelligent building control systems and transport routes. With the growth of the Internet of Things (IoT), especially the use of sensors like rain sensors will continue to expand into more diverse and complex areas of everyday life.