Cayenne pepper, also known as Capsicum annum, is a chilli powder that is used to flavor food. Cayenne pepper is a finely powdered powder made from the pods and seeds of many species of Chili. It is a collection of tapered, usually slender, and primarily red coloured peppers. The majority of modern cayenne peppers are mostly present in different coloured like yellow, purple, or red. Besides, cayenne pepper is commonly used in spicy foods as a powder or whole. It's also utilised as a natural supplement. Cayenne pepper is used to season meals in both raw and powdered form. Furthermore, cayenne pepper grows best in tropical and temperate climates, and it prefers moist, warm, rich soil to mature. Chilli powder offered in stores may be a mixture of other peppers, but cayenne powder is created entirely of cayenne peppers, which sets it apart from other chilly powders. Vitamin E, vitamin A, vitamin C, vitamin B6, riboflavin, manganese, and potassium are all abundant in cayenne pepper.

The exclusive COVID 19 impact analysis report by Axiom MRC provides a 360 degree analysis of micro and macro-economic factors on the cayenne pepper market. In addition, complete analysis of changes on the cayenne pepper market expenditure, economic and international policies on supply and demand side. The report also studies the impact of pandemic on global economies, international trade, business investments, GDP and marketing strategies of key players present in the market.

As the COVID-19 epidemic spreads, the focus on the food processing industries and employees' health and safety is increasing. As the world's most mature and competitive industry, it has long reaped the benefits of several unpriced environmental and social consequences. Spices are believed to improve disease severity in COVID-19 by rapidly desensitising. Spices with Nrf2 agonists, on the other hand, have a longer duration of action. COVID-19 infection and/or severity could be reduced by very high dosages of spices ingested on a daily basis in Asian or Sub-Saharan African countries. However, most people in Western countries, with the exception of Hungary, eat fewer spicy meals, and quantities taken elsewhere cannot be given quickly due to side effects. 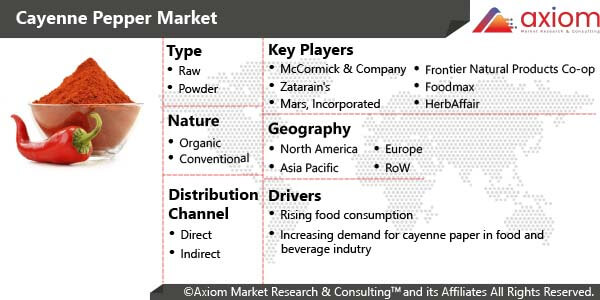 Cayenne Pepper Market by TypeBy Type, cayenne pepper market is segmented into the raw and powder segment. India is the world's greatest producer, with an estimated 779 000 ha dedicated to the crop in 2008. India is also the world's top exporter of Cayenne Pepper. Ethiopia is the second-largest producer, with an estimated 290 000 ha planted per year, followed by Myanmar with 109 000 ha. Fruits are usually left to partially dry on the vine before being collected and dried in well-ventilated places with direct sunlight. Sun-drying can cause bleached fruits, especially if rain falls during the drying process, and extraneous materials can adhere to the fruits

By nature, cayenne pepper market is segmented into organic and conventional. Organic cayenne pepper is more growing segment and expected to grow more during the forecast period. As consumers are become health conscious so the number of people are shifted toward organic Cayenne Pepper. Conventional segment is also expected to have new growth demand during the forecast period.

By distribution channel, cayenne pepper market is segmented into direct and indirect. The direct distribution of products in the form of fresh cayenne pepper and dried cayenne pepper is the product flow in the supply chain of cayenne pepper. Farmers Province produce fresh cayenne, which is distributed through collecting traders, wholesalers, market traders, retailers, and out-of-town dealers. Farmers, dealers, fellow farmers, and farm shops are all sources of specific seedling production facilities at the farmer level. Fertilizers, medicines, and agricultural equipment are available for purchase in the farm store.

In terms of region, the Cayenne Pepper Market is studied for the key regions including North America, Europe, Asia Pacific, and Rest of the World. Cayenne peppers are named after the native Tupi term for Chile, which originated in French Guiana, north of Brazil. Spanish explorers found the peppers in the 15th century, and Christopher Columbus brought them back to Europe when he returned from his expedition to the Americas. The seed's lengthy viability allowed Spanish and Portuguese explorers to easily disseminate it throughout the tropics and subtropics. Cayenne pepper was imported to England from India in the 1500s, and by the 1500s, it was valued globally, rivalling the peppercorn. Cayenne pepper powder is now widely used in Spanish, Portuguese, and Mediterranean cuisines throughout the Americas and Europe. Cayenne peppers are grown mostly in India, East Africa, Mexico, and the United States; however, the United States imports the majority of its cayenne powder supply from India and Africa.