The exclusive COVID-19 impact analysis report by Axiom MRC provides a 360 degree analysis of micro and macro-economic factors on the global beta glucan market. In addition, complete analysis of changes on the global beta glucan market expenditure, economic and international policies on supply and demand side. The report also studies the impact of pandemic on global economies, international trade, business investments, GDP and marketing strategies of key players present in the market. As the COVID-19 pandemic continues to spread, emphasis on the health and safety of the food processing industry and its employees is intensifying. Being the most mature and competitive sector across the globe, it has long benefitted from many unpriced environmental and social externalities. A shift to incorporate environmental impacts into the true cost of food has become more apparent in current years. But the pandemic is serving to elevate social factors as a key consideration. With stakeholders along with the supply chain (including consumers and regulators) demanding change, the sustainability and ultimate financial success of food and beverage companies will lie, at least in part, in their ability to manage these expectations and address these factors.

The key factors such as growing health consciousness among consumers coupled with increasing health expenditure is expected to boost the growth of the market. With the shift in demand from processed to healthy food, functional, and superfoods, consumers have become more conscious of their health and maintain it proactively through healthy living. Consumers are more aware of the food ingredients and pay attention to nutrition labels and ingredients of the food products. This shift in buying habits has resulted in higher demand for healthy foods and supplements and has attracted several manufacturers to offer new food products that are functional, not genetically modified, and sourced naturally. With the increasing consciousness and concern about health and wellness, demand for multifunctional beta-glucan is expected to rise in the upcoming years.

Likewise, manufacturers are also redesigning products and lowering cholesterol, sugar, fats (trans-fat and saturated), and sodium content of the food. They are replacing artificial ingredients and introducing products high in protein, fibers, and others that offer functional benefits. These developments have also resulted in the rise of per capita expenditure in major economies in North America and Europe, showing that people are relatively spending more on health & wellness as compared to the last few years.

The various opportunities such as changing lifestyles, growing economy, and shift toward natural products are observed in developing economies, leading to the growth in demand for beta-glucan, not only in food, personal care, and pharmaceutical products but also in other industrial applications, such as animal feed and biofuel production. Developing economies such as China, India, and countries in the Middle East & Africa, in the coming years, are expected to experience a sharp upsurge in demand for beta-glucan extracted from different raw materials. This demand is attributed to be driven by an increase in the consumption of healthy foods, nutraceuticals, and personal care products. Adding to that, these regions also provide cost optimization in terms of production, labor cost, and processing. High demand, coupled with a low cost of production, is a key feature that is expected to support beta-glucan manufacturers to enter into new emerging economies.

The inconsistency in regulatory norms governing beta glucan is likely to restrain the market growth of the global beta glucan market. The beta-glucan market is governed by different regulatory bodies, which vary regionally. The legislation regarding the extraction, processing, formulation, and end-product manufacturing is different from regions to regions. Health claims also differ at the country level, thereby hindering the usage of beta-glucan in pharmaceuticals as well as food & beverages. The regulations also govern and monitor claims made by end-product manufacturers and labelling requirements.

The report provides in-depth analysis of global beta glucan market, market size, and compound annual growth rate (CAGR) for the forecast period of 2022-2028, considering 2021 as the base year. With increasing demand for various iodine derivatives in various applications has led the increasing demand for market and is expected to witness the growth at a specific CAGR from 2022-2028. 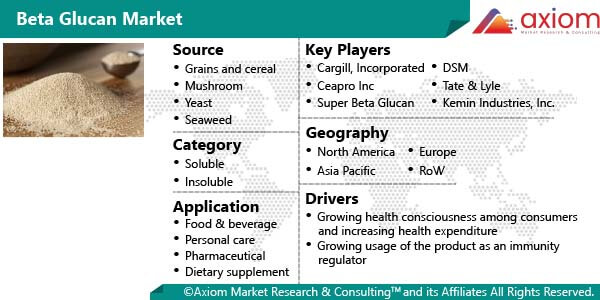 Source of beta-glucan mainly include grain and cereals like oats, barley, and wheat, mushrooms, yeast and seaweeds. Beta-glucan is considered to be a fiber which offers a number of health benefits, including lowering cholesterol, improving blood sugar management, and boosting the immune system. It is a naturally occurring complex carbohydrates that is found in the cell walls of certain foods and it belongs to a group of sugars known as polysaccharides and beta-glucan obtained from different source are healthy and they are safe to consume by both human and animals.

It is naturally found in its various sources, and beta-glucans obtained from various sector may have slightly different structure which are widely used for various purposes, for instance the immune-boosting benefits of beta-glucan tend to be most prominent in mushrooms, while beta-glucan extracted from cereal, are considered to be useful for managing cholesterol levels. Apart from that, various techniques are used for extracting the beta glucan from various sources, so that the extraction process do not affect the physiochemical and functional properties of extracted beta-glucan.

On the basis of category, beta-glucan is categorized into soluble beta-glucan and insoluble beta-glucan. Beta-glucan is considered to be one of the most high-fiber foods, they have certain benefits to offer, some stand out due to specific types of fiber they provide. Both the categories of beta glucans have various health benefits which increases the immunity level in human body and provide several other health benefits. As the people are moving towards healthy food, they are including fiber in their diet which has increased the demand for beta glucan, also with growing cases of chronic diseases has increased the demand for beta-glucan and for various application, various category of beta-glucan is used.

Soluble beta glucan is mainly obtained from cereals and grains, mushrooms and several other sources and they can be easily dissolved in the water, these are the most commonly demanded beta glucans, this category of beta-glucan is known for reducing the cholesterol level by reducing the absorption of carbohydrate and used for various other chronical diseases, while insoluble beta glucans are the one which do not dissolved with water but it moves through the gastrointestinal tract, insoluble beta glucans are mainly sourced from yeast and it is widely known for increasing the immunity of the body.

Beta-glucan has its application in food and beverages industry, personal care, pharmaceutical, dietary supplement and animal feed. Beta-glucan is a natural polysaccharide obtained from various sources like cereals and grains, yeast etc. these are anticipated to be immuno-modulator which helps the human body to boost the immunity and protects the body against disease or other potentially damaging foreign bodies, also it has certain healthy properties which is why it is widely used in various application.

Among various applications of beta-glucan, it is commonly used in the food and beverages industry, since this industry is growing very fast and health literacy is also increasing which has raised the demand for beta-glucan, also beta-glucan has certain characteristics which do not affect the taste and texture of the food but increases the nutritional value of it. Along with that, the use of beta-glucan is increasing in the pharmaceutical sector as well, since chronic diseases like heart diseases, diabetes etc. are increasing and many of the studies states that beta-glucan is effective in all these diseases. Apart from that, beta-glucan is considered as a natural immunity booster due to which it is widely used for dietary application for both human and animals.

The competitive landscape analysis of beta glucan market is certainly based range of market players operating in the healthcare market with increasing demand for production of beta glucan. Besides, number of market players offered wide range of products for different application in various geographic locations. The market has major competitive analysis based on new product launches as well as other developments.

Scope of the Report:

1) What are the drivers for beta glucan market?

The key driving factors of the market are growing health consciousness among consumers and increasing health expenditure.

2) Which is the leading application segment for beta glucan market?

Food and beverage segment has accounted the major market share, and is expected to witness the growth at highest pace during the forecast period.

3) Which region is gaining majority of market share during the forecast period (2022-2028)?

North America is expected to gain major market share during the forecast period (2022-2028).