A cardiac pacemaker is a synthetic device that sends electric pulses to the heart with a purpose to hold the regularity in the overall heart rhythm. A pacemaker is a small electric tool used for the treatment of arrhythmias in case of individuals who are diagnosed with a condition of irregular heartbeat. Pacemakers can also be used to treat certain types of heart failure. Typically, the electrical signal that makes your heart beat begins in an area of your heart called the sinus node (SA). The SA node is your heart's natural pacemaker. Electrical signals generated by the SA node travel synchronously from the apex of the heart, resulting in a heartbeat. In some situations, there are problems with this electrical signalling, causing the heart to beat too fast (tachycardia), too slow (bradycardia), or otherwise irregular. It is an arrhythmia. A pacemaker produces electrical impulses that help your heart beat at a normal rate, or both. The growth of this market is mainly driven by factors such as high demand for using minimum invasive procedure, increase in investment from private and government authorities for the overall healthcare sector, and a rising prevalence of cardiovascular diseases especially in case of the elderly people.

The global Pacemaker market is driven by increase in healthcare spending which has occurred due to increased economic and income growth, facilitated by industrialization in most of the economies and especially the developed nations around the globe. The growth of the market is also supported by the rise in demand for minimum invasive procedures, causing an upward push in investment from private and government authorities for the healthcare sector. Surge in geriatric population is predicted to boost the growth of the market over the forecast period Also, there is a huge increase in cases of cardiovascular diseases in case of the elderly people, which is a key driving factor for market growth. The boom in adoption of cardiac surgery including endocardial or epicardial surgery for the implantation of pacemaker will positively impact the growth of the Pacemaker market. Also, the rise in approval from the regulatory authorities for newer products is also expected to stimulate market growth. Thus, the presence of key players in healthcare medical devices, favourable government regulation for development of advanced pacemakers, and rise in incidence of hypertension and other cardiovascular issues is expected to boost the growth of the market during the estimated time period.

The market is expected to have new growing opportunities with rise in investment in technological activities by the government authorities and also the manufacturers to develop innovative and safer pacemakers in order to combat the rise in prevalence of cardiovascular issues such as hypertension. There are new areas of growth with respect to the developing nations.  Also increase in regulatory approvals for the advanced products is expected to create wide range of opportunities. Likewise, growth and diversification of market with new collaborations and increase in global partnership between key players is expected to create new market opportunities for the market over the projected time period.

The global pacemaker market is expected to have market restraints like recall of cardiac pacemakers over the world. This factor is expected to create hurdles for the market growth during the forecast period.

Major players have anticipated an increase in manufacturing cost as a challenging factor for the worldwide cardiac pacemaker market over the forecast period. Also high cost of pacemaker implant procedure along with the major issues like infection site of surgery, pneumothorax, and bleeding is expected to be a major challenge for the growth of the market.

The report provides in-depth analysis of global Pacemaker market, market size, and compound annual growth rate (CAGR) for the forecast period of 2022-2028, considering 2021 as the base year. With increasing demand for pacemakers in various cardiac applications has led the increasing demand for  market and is expected to witness the growth at a specific CAGR from 2021-2028. 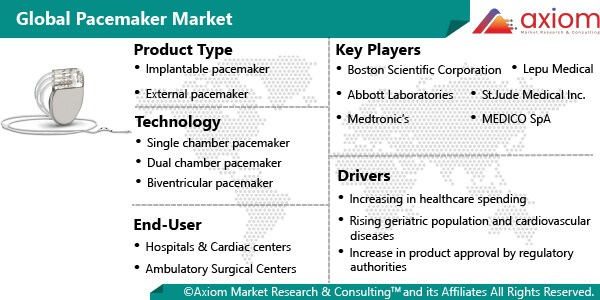 By product type, the Pacemaker market includes the key segments of
The implantable pacemaker segment is expected to lead the market over the forecast period. This is due to increase in cases of bradycardia, rise in demand for implantable pacemakers, and development in R&D along with advanced mechanism within the healthcare sector. However, the external pacemaker segment is anticipated to witness high growth over the forecast period due to rise in incidences of coronary heart disease, increase in the geriatric population, and improvement of new generation technology within the healthcare industry.

The Pacemaker market is significantly studied for key technological forms like
The dual-chamber implantable pacemaker segment is expected to dominate the market over the forecast period. This is due to a rise in cases of bradycardia, and atrial fibrillation. These pacemakers connect to both ventricles to regulate contractions and help the two chambers work together, allowing blood to continue to flow properly. These devices are used exclusively to treat bradycardia and atrial fibrillation. The growing prevalence of atrial fibrillation is therefore likely to prove conducive to the expansion of the industry.
However, the biventricular pacemaker segment is also predicted to witness significant growth over the forecast period, due to rise in incidences of coronary heart disease and improvement of technology within the medical devices industry.

The Pacemaker market has major end users like
The hospitals and cardiac centers segment is expected to dominate the market over the forecast period. Hospitals and cardiac centers provide advanced care to their patients and offer reimbursements at some point in case of surgeries, facilitating a rise in growth. The ambulatory surgical centers segment is predicted to witness a promising growth over the forecast period as a result of its superior advantage particularly to rural population of the society and simplicity of treatment. Furthermore, the growing demand for the reduction in the surgical and post-surgical expenditure and the growing prevalence of cardiovascular diseases is expected to boost the growth of the segment.

The global Pacemaker market is studied for the following regions
North America is anticipated to lead the market during the forecast period. The growth in the region can be attributed to the presence of key players, increase in geriatric population with cardiac problems, technological improvements in development of advanced pacemakers like bluetooth-enabled pacemakers, and increased regulatory approvals for pacemakers. Rise in incidences of cardiac problems consisting of congestive coronary heart failure, arrhythmia, and cardiac arrest are expected to further propel the growth of the market within the region.
In the Asia Pacific, region the market is expected to exhibit high growth over the projected time period. Market expansion via the means of the important key players and exploration of large untapped possibilities are key factors responsible for the growth of the market over the forecast period. Also, in the Asian countries, there is a rise in prevalence of cardiovascular disorders. Furthermore, investments within the healthcare sector, mainly in Japan, India, and China have definitely attracted more investments from key players. The developing countries are gradually specializing in growing strong healthcare centers for cardiac prognosis and treatment. Such factors are predicted to drive the growth of the market in the coming years.

A 360 degree analysis of micro and macro-economic factors on the global Pacemaker market is included in this exclusive report provided by Axiom MRC. In addition, complete analysis of changes on the global Pacemaker market expenditure, economic and international policies on supply and demand side is provided in this exclusive report. The report also studies the impact of pandemic on global economies, international trade, business investments, GDP and marketing strategies of key players present in the market.
During COVID-19 pandemic, global Pacemaker market was unfortunately being affected adversely due to supply chain distribution which affected the material supplies required for manufacturing of medical devices, which has certainly impacted the market growth to a huge extent.  The COVID-19 pandemic has caused a negative impact on the healthcare industry around the world. A large variety of clinics and hospitals throughout the globe have been restructured in order to provide health facility for patients diagnosed with COVID-19. This has caused in cancellation of many scheduled nonessential surgical processes which were supposed to be carried out during the pandemic situation. However, post COVID-19 the market is expected to witness new growth opportunities and is anticipated to have a great demand in the upcoming years.

The competitive landscape analysis of Pacemaker market is majorly focused on expanding the global growth of cardiac pacemaker sector with new product innovation, business expansion, increasing presence of range of manufacturers operating in cardiac pacemaker industry has led the growing demand for the market.  Besides, the market offers range of products in different applications to fulfil the required demand of consumer which is further contributing healthy growth in the market.
The key players studied in market are

July 2020: Abbott Laboratories had got US FDA approval for its Gallant line, which involved an implantable cardioverter-defibrillator and a cardiovascular resynchronization treatment defibrillator with Bluetooth innovation.
January 2020: Medtronic had received FDA clearance for the product Micra AV, atrioventricular (AV) synchrony integrated pacemakers. It is proposed to treat AV block condition that features impairment between electrical signals among the atria and the ventricle. This product offered higher safety and effectiveness, thereby adding to the strength of the pacemakers’ product portfolio.

What would be forecast period in the market report?

Which is the leading end-user segment for Pacemaker market?

Hospitals and Cardiac centers segment has accounted the major market share, and is expected to witness the growth at highest pace during the forecast period.

Which region is gaining majority of market share during the forecast period (2021-2028)?

North America is expected to gain major market share during the forecast period (2021-2028).