The exclusive COVID-19 impact analysis report by Axiom MRC provides a 360-degree analysis of micro and macro-economic factors in the APAC Battery Separator Films market. In addition, complete analysis of changes in the APAC Battery Separator Films market expenditure and economic and international policies on the supply and demand side. The report also studies the impact of pandemics on APAC economies, international trade, business investments, GDP and marketing strategies of key players present in the market. The COVID-19 pandemic had a severe impact on the li-ion battery industry supply chain, including the battery separator films market. For example, the monthly sales of EVs in China declined by 39% in Q1 2020. The cost of lithium-ion batteries has dropped sharply over the past 10 years, such falling lithium-ion battery prices and the growing adoption of electric vehicles are the major factors driving the battery separators film market demand during the projection period.

The APAC Battery Separator Films market is driven by the growing demand for electric vehicles. Electric vehicle sales have increased, with growth in all three top auto markets such as China, the US, and Europe. Reducing prices of EV batteries, increasing demand for electric vehicles in the transportation and automotive sectors, and government initiatives about EVs are major factors behind the growth of the market. Furthermore, a lithium-ion (Li-ion) battery, a rechargeable battery is widely used in electric vehicles and several portable electronics products. They have a higher energy density than typical nickel-cadmium or lead-acid rechargeable batteries.

The market has major restraining factors like Safety Issues Related to Batteries. Safety issues related to usage, storage, and transportation of batteries are a major restraining factor that could hamper the market growth. Lithium-ion batteries (LIBs) with outstanding performance are extensively used in electric vehicles (EVs) and portable electronics, but frequent explosions and fires limit their more widespread applications. Lithium-ion battery fire hazards are related to the high energy densities together with the flammable organic electrolyte is the factor restraining the market growth.

The report provides an in-depth analysis of the APAC Battery Separator Films market, market size, and compound annual growth rate (CAGR) for the forecast period of 2022-2028, considering 2021 as the base year. With the increasing demand for various Battery Separator Films in various applications has led to the increasing demand for the market and is expected to witness growth at a CAGR at specific CAGR from 2021-2028. 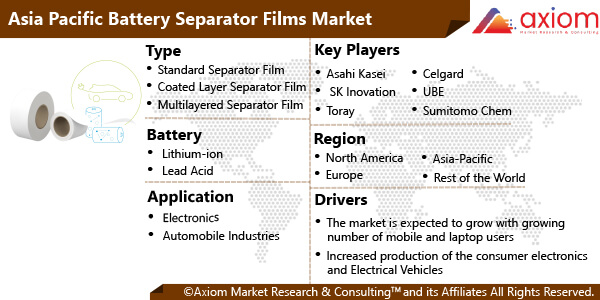 The automobile industry is dominating the market for the battery separator film market. Increasing production and sales of electric vehicles across the globe are the major driving factor behind the market growth. Furthermore, the United States is among the countries leading in APAC EV sales, along with other economies like Canada, China, and Japan, which have already begun transforming their public transportation infrastructure to electric. However, automobile manufacturing plants produced and delivered very few automobiles owing to the APAC supply chain disruptions resulting from lockdowns. This can impact the growth of the battery separator films market during the pandemic period.

China is anticipated to witness increasing demand for Battery Separator Films owing to the presence of well-established market players. The Asia Pacific held the largest market share of the APAC battery separators films market for many years. The market here is anticipated to grow at a significant growth rate during the forecast period. Due to the strong presence of large battery manufacturers and several end-user industries in countries such as Japan, China, and India within this specific region, the Asia Pacific is expected to grow at a significant rate from 2022 to 2028. The Asia Pacific is expected to be the fastest-growing market for battery separator film during the forecast period. This region’s market expansion can be attributed to the high demand for battery materials in emerging markets such as China and India. This region has recently emerged as a hub for automobile production, opening up avenues and opportunities for the OEM market.

September 2021: Asahi Kasei announced that it will increase production capacity for the Hipore Li-ion battery (LIB) separator at its plant in Hyuga, Miyazaki, Japan. The increasing market for LIB is majorly propelled by automotive applications owing to the rising demand for electric-drive vehicles. Supplying both dry-process and wet-process separators with its Celgard and Hipore products, Asahi Kasei holds a world-leading position as a LIB separator producer.

What are the drivers for the Battery Separator Films market?

The key driving factor of the market is the growing demand for electric vehicles.

Which is the leading application segment for the Battery Separator Films market?

Automotive Industries have accounted for the major of market share, and I expected to witness growth at the highest pace during the forecast period.

Which region is gaining the majority y of market share during the forecast period (2021-20The 28)?

China is expected to gain major market share during the forecast period (2021-2028).