Electric farm tractors have introduced a revolution in the agriculture sector, these tractors are solving the problem of carbon emission caused by the use of heavy machineries in the agriculture industry. Electric farm tractor are the new generation tractors, these are the innovative tractor that have been designed after the electric vehicle technology has been arrived in the heavy machinery sector. These tractors are powered by rechargeable batteries, instead of fossil-fuels. The batteries of electric tractor can be easily recharged by plugging them into a socket or regular home charging, also in some of the cases, these batteries can be charged by the solar power as well. In addition to that, these batteries take 6-10 hours to charge a tractor battery. Moreover, in this region, agriculture is considered to be the backbone of the economy, and introduction of electric tractors are likely to bring revolution in the agriculture industry of the region.

The Asia-Pacific Electric Farm Tractors market is driven by increased awareness about reducing emission of greenhouse gases from machineries used in the agriculture sector. Various countries in this have taken several initiatives for reducing the carbon emission, for instance, countries like Hong Kong, Japan and South Korea have set a target have set a target to achieve carbon neutrality by the year 2050, and China has set a target of zero emission by the year 2060 and India by 2070, due to which the popularity of the e-vehicle is growing at a rapid pace. Moreover, as per the second Biennial Update Report submitted by the Government of India to the United Nations Framework Convention on Climate Change, it mentions that the agriculture sector is responsible for 16.2% of the total Greenhouse gas emissions. Thus, as the environmental awareness is increasing, and governments are taking the use of e-vehicles is increasing and it is driving the market for electric farm tractors.

The market is expected to have new opportunity, as the environment awareness across the region is growing at a rapid pace, and various countries are promoting the use of battery operated vehicles which is highly driving the market for electric farm tractors. For instance, in October 2018, the government of India announced to granted exemption to Battery Operated Transport Vehicles. Moreover, various other schemes has been also provided by government to encourage the farmers to promote the use of electric tractors. In addition to that, China also imposed a rule in the year 2019, where each Chinese vehicle manufacturer and importer is required to make or import at least 10% electric vehicles. Thus, efforts taken by the regulatory bodies are likely to help the market to grow further.

The Covid-19 pandemic hampered the growth of market to major extent which has created a major challenges for the market growth. Also, these tractors run upon batteries which can be recharged and it generally takes 6-8 hours to get a battery charged on a residential 15 amps unit and with this recharged battery, an electric tractor can be operated for 60-80 kilometers at a maximum speed of 20-25kms/hour or they can run from 4-8 hours on a fully recharged battery. Thus, in many of the cases, it is not suitable for the farmers to use electric tractors as they take a long time to charge and once the battery is drained, the work might get hampered.

The report provides in-depth analysis of Electric Farm Tractors market, market size, and compound annual growth rate (CAGR) for the forecast period of 2022-2028, considering 2021 as the base year. As the environment awareness is increasing and the automotive industry is moving towards the electric automotive, market is expected to witness the growth at a specific CAGR from 2022-2028. 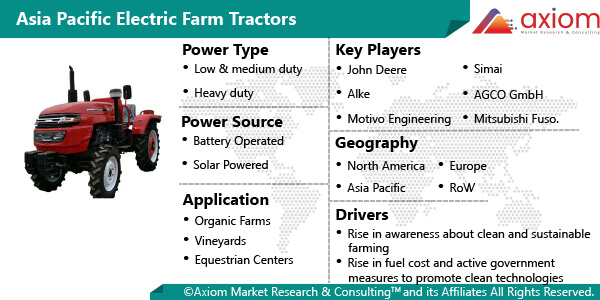 On the basis of power type, the market has been dominated by the low & medium duty tractors, these tractors are known to be the widely popular for low & medium duty type, since they cause precise movements to minimize fuel consumption, fertilizers, and seeds and to contribute to sales in the lower-middle duty market. Also, Growing concerns about environmental pollution are generating demand for small and medium-duty tractors market. Moreover, reduced operating costs and low maintenance of biodiesel machines will increase sales of these products in the developing economies.

Electric Farm Tractors based on the power source has been dominated by the battery powered tractors. Battery powered tractors are known to be widely popular in the market as they do not require complex configuration and they can be easily charged. Moreover, they add certain other benefits as well, such as batteries are portable, durable and require less maintenance. Also, in the last few years, regulatory bodies across the region are focusing upon developing EV charging infrastructure, which is likely to increase the popularity of battery powered electric tractors in the coming years as well.

Asia Pacific is anticipated to witness increasing demand for Electric Farm Tractors, since this region is consisting of countries like China, and India, where agriculture is the backbone of the economy and as the mechanization is taking place in these countries, the popularity of tractors is increasing at a rapid pace. Moreover, in this region, China is one of the important countries, since it is the major producer of the electric vehicles and one of the major suppliers of components of electric farm tractors. Moreover, in this region, India is considered to be one of the fastest growing countries, and emerging markets for the electric farm tractors, since modernization is taking place in agriculture sector of the country.

The exclusive COVID-19 impact analysis report by Axiom MRC provides a 360 degree analysis of micro and macro-economic factors on the Electric Farm Tractors market. In addition, complete analysis of changes on the Asia-Pacific Electric Farm Tractors market expenditure, economic and international policies on supply and demand side. The report also studies the impact of pandemic on economies, international trade, business investments, GDP and marketing strategies of key players present in the market. The Asia-Pacific is considered to be the most affected market from the COVID Pandemic, since China is the origin of the COVID-19 and the virus and rapid spread of this virus in its earlier stage led to drastic impact on almost every business, which include automotive as well. Also, in the whole region lockdown was imposed to restrain the spread of virus, which led to disruption in the supply chain as well, and led to downfall of the Electric Farm Tractor market. However, owing to rapid vaccination drive, lockdown has been lifted up and the market has been growing again at steady rate.

The key players studied in market are

June 2022: Sonalika tractors the leading brand in India has shown the 42% growth in total tractor sales with 12,615 Units in May month last year. The Company product Sikander RX 50 with 12F+ 3R has been launched for Madhya Pradesh farmers and MM 18 Narrow track has been launched specially for Gujrat farmers who are involved in vineyards and orchards.

May 2022: Sonalika tractor has launched its fully customized Sikander RX 50 DLX tractor in Madhya Pradesh as per crop and region-centric requirements. This Sikander RX 50 DLX has been equipped with 12F+3R Multi-speed transmission that enables farmers to use a variety of implements in various conditions.

What are the drivers for Electric Farm Tractors market?

The key driving factors of the market are in rising demand for e-vehicles, with increased environmental awareness.

Which is the leading application segment for Electric Farm Tractors market?

Organic farm has accounted the major market share, and is expected to witness the growth at highest pace during the forecast period.

Which country is gaining majority of market share during the forecast period (2022-2028)?

China is expected to gain major market share during the forecast period (2022-2028).