Space grade connectors are used in the electronic equipment that are being utilized in the space industry, these connectors need to be well tested and should be approved by the authorized space agency or regulatory bodies of the respective countries. In recent years, various parts of the globe have made a huge emphasis on the space research and exploration, due to which many of the advancements, features and specification are being introduced to the spacecraft, satellites, carrier rocket, space stations, etc., so that the equipment, communication system and other functions of these can work smoothly, which creates a great utility of the space grade connectors in space sector.

The global space grade connector market is growing as the need for satellite broadband services has been increased across the globe. In the last few years, digital penetration has been increased in almost every part of the globe, at a rapid pace. Thus, the number of internet users are growing at a drastic rate. The increased number of internet users are highly backed by affordable price of high-speed data, which has also increased the use of broadband internet in both residential and commercial sector and this has led to increased launch of satellite in the space. Thus, with increased satellite in the space, there has been a great utility of space grade connector in these satellites, which is majorly driving the market.

The market is expected to have a new opportunity with the increasing expenditure of various regulatory bodies has been increased on the space industry. In recent years, the race of technology has been increased at a faster rate on a global level, due to which the number of space exploration programs in various countries has been increased. Also, an advanced space sector has become need for every nation in order to grab new business opportunities. Thus, as the expenditure on space industry is increasing all around the world, there has been a great demand for the space grade connector.  Moreover, growing dependency of defence sector has been also providing a great opportunity for the space grade connector market to grow at a rapid pace.

The market for space grade connectors is growing at a rapid pace, but still there are few challenges which affect the growth of this market, which majorly include the entry of new players in the market is not easy. Since, the space grade connectors are made with specific industry standards, and it becomes difficult to enter small-scale to cop-up with these standards. Moreover, it became very difficult for the small scale enterprises engaged in the space industry to survive during the COVID crisis, since, this industry requires huge investment and due to the negative impacts of COVID pandemic, small scale enterprises suffered the most.

The report provides an in-depth analysis of the global space grade connectors market, market size, and compound annual growth rate (CAGR) for the forecast period of 2022-2028, considering 2021 as the base year. Increased launch of satellites with growing date traffic is likely to help the market to grow further at a specific CAGR from 2022-2028. 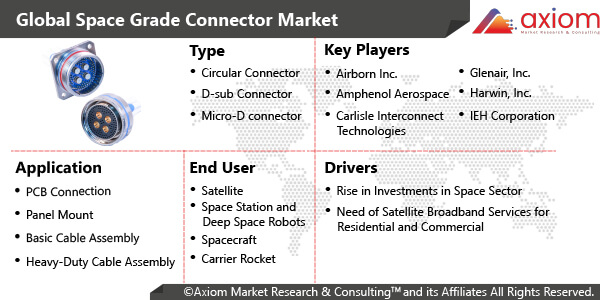 By type, the Space Grade Connector market includes a key segment of

Based on type, the market for space grade connector has been dominated by the circular connectors. These are the cylindrical, multi-pin electrical connector that contains contacts that power electrical devices, transmit electrical signals or transmit data. A circular connector is developed to withstand harsh environments and consistently deliver data. It is developed with a circular interface and housing to rapidly and easily disconnect and connect power, signal, and optical circuits without the use of coupling tools such as torque wrenches. These are known to be highly reliable in the harsh environment as well, due to which they are highly demanded in the market.

Panel Satellites are considered to be the major application for the space grade connector market, since space grade connectors used in the panel mount are associated with many of the benefits, which include they are efficient in the areas with high levels of moisture, also these connectors meet low smoke, toxicity, and flammability. Moreover, PCBs also hold an important share in the market, as its use has been increased in the space industry, owing to various advancements made in these circuit boards, due to which they are smaller and complex, due to which they can be widely installed in the in spacecraft, satellites, drones, etc. and has raised the demand for space grade connectors.

Satellites are known to be the major end-user for the space grade connector market, these are widely used in the satellites owing to their certain properties which make them able to handle extreme temperatures (both hot and cold), shock and vibration, which help the satellites to perform their operations in an efficient manner. Apart from that, these are highly used in the Ground Support Equipment as well, since such equipment is used to hold the aircraft between flights, and as the aviation industry is growing at a rapid pace, the demand for space grade connector is growing rapidly.

For the space grade connector market, the North America region has played a dominant role in the global space grade connector market owing to the various factors which mainly includes presence of a great number of companies in this region which are actively working in the field of space exploration and investing a great amount in the research of this field. Moreover, the region is known for well-known space agency like NASA which is one of the most recognized space agencies across the globe. U.S. is the leading country in this region for space grade connector, around half of the operating satellites in the earth orbit also belongs to the U.S. only and the country is continuously focusing upon launching the new satellites.

Axiom MRC provides a 360-degree analysis of micro and macro-economic factors in the global Space Grade Connector Market. In addition, a complete analysis of changes in the global Space Grade Connector market expenditure, and economic and international policies on the supply and demand side. The report also studies the impact of a pandemic on global economies, international trade, business investments, GDP, and marketing strategies of key players present in the market.  COVID-19 pandemic seems to be a public emergency after World War 2. COVID-19 impacted many industries around the world. During the COVID crisis, a lot of new trends were observed, and data traffic surged during this period and increased the use of broadband services, as dependency on IoT devices and connected devices increased throughout 2020. Also, in developing countries like India, Canada, etc. digital penetration increased at a rapid pace which enhanced the internet consumption, which is driving the market for space grade connector.  On another side, this pandemic has made moderately negative impact on the space industry, since many of the astronomy conferences were forced to cancel in-person meetings and moved online, also the first launch of the Space Launch System moon mega rocket was delayed, and various other countries also delayed their space programmes, due to which the market share for the space grade connector reduced. However, it is expected that as the several restriction has been lifted up, it is expected that, space technologies would be given more focus, which is expected to raise the market share of the space grade connector market.

May 2022:  Smiths Interconnect announced the availability of highly reliable Hypertac hyperbolic junctions in a new catalog of their HYPER series. Hypertac hyperbolic contacts are known worldwide for providing reliable and robust connections in applications running in complex environments where reliability and security are critical. The HYPER series catalog offers 51 hyperbolic contacts with 14 pin sizes up to 6.12 mm for signal contacts, different connection types (compression, welding cup, straight ends, open and closed) and currents up to 0.4 mm for coating

Space Grade Connector Market is based on Type, End User, Application, and Geography. By Type, the market is segmented into Circular Connector, D-sub Connector and Micro-D Connector. Based on Application, the market is classified into PCB Connection, Panel Mount, Basic Cable Assembly, Heavy-Duty Cable Assembly and Test Equipment. By End User, the market is segmented into Satellite, Space Station and Deep Space Robots, Spacecraft, Carrier Rocket and Ground Support Equipment. The Global Space Grade Connectors Market is studied across various key countries of regions such as, North America, Europe, Asia Pacific and Rest of the World. As the regulatory bodies across the globe are spending a great amount on the space exploration and number of satellite launch is increasing, the market for space grade industry is growing rapidly.

What are the drivers for Space Grade Connector Market?

The key driving factors of the market are increased demand for the space grade connector, as the number of satellite launched have been increased.

Which is the leading end user segment for Space Grade Connector?

Satellite end user has accounted for the major market share and is expected to witness growth at the highest pace during the forecast period.

Which region is gaining majority of market share during the forecast period (2022-2028)?

North America is expected to gain major market share during the forecast period (2022-2028).