Micro irrigation is defined as the frequent application of small quantities of water directly above and below the soil surface to plant root zone; usually as discrete drops, continuous drops or tiny streams through emitters placed along a water delivery line. It is a family of irrigation systems consisting of two major types namely, drip irrigation and sprinkler irrigation and is being majorly used in agricultural practices for precise water application. 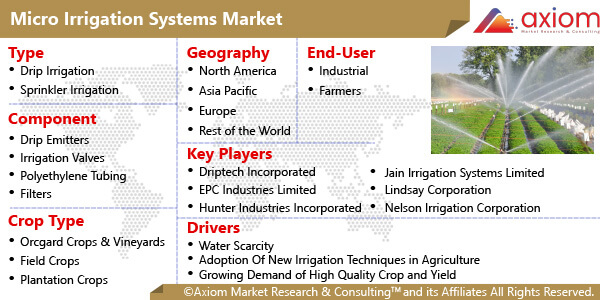 Use of micro irrigation products is increasing to a great extent in the developed countries of Americas as well as Europe. Countries in Asia-Pacific are also now adopting micro irrigation systems on a large scale. The usage of these systems is high in draught areas of Asia-Pacific. It is increasingly becoming an alternative to rainfall based agriculture due to high uncertainty of rainfall. The global micro irrigation market is segmented into its types which are sprinkler irrigation and drip irrigation; by components which include emitters, irrigation valves, polyethylene tubing, filters and micro sprays. The market is studied for orchard crops & vineyards, field crops, plantation crops and others. The end users considered in the market are industrial users, farmers and others. The market is studied for North America, Europe, Asia-Pacific, Latin America and Middle-East & Africa. The leading players in this industry include Jain Irrigation Systems Limited (India), Lindsay Corporation (U.S.), The Toro Company (U.S.), Driptech Incorporated (India), Hunter Industries Incorporated (U.S.), Nelson Irrigation Corporation (U.S.), Netafim Limited (Israel), Rain Bird Corporation (U.S.), Rivulis Irrigation (Israel), Irritec S.P.A (Italy), T-L Irrigation Company (U.S.), Valmont Industries (U.S.) among others.

Axiom MRC’s Qual-Quant data modeling tool is an in-house developed tool, which is based on the fundamentals such as Top Down and Bottom Up approaches. The data model compares irrigation, agrochemicals etc. markets to estimate and validate the qualitative and quantitative findings across various countries. It also allows to analyze the market value chain in comparison with main market i.e. global irrigation market to arrive at holistic and factual findings of the markets. The outcome of the data collection and secondary research is further validated with in-depth primary interviews conducted with key industry participants of micro irrigation market. All our findings are verified and validated by the industry experts and subject matter experts which typically include :- ? CEOs/CMOs of the key micro irrigation companies ? Key Opinion Leaders such as Research Experts, Consultants, Knowledge Professionals and others ? Managers and top executives of key players ? Various countries Government irrigation engineers and consultants.