The use of potato in the food industry has encouraged food investigators and biotech scientists for studying its nutritional value. Increasing inclination of consumers towards plant-based proteins has further increased the consumption of potato protein. To enhance the production of potato proteins for large-scale production new production techniques and experimental trials are being conducted. Among all the functional ingredient, protein ranks very high in terms of future potential. Potato protein has emerged as one of the most trending segment, owing to growing demand for plant-based protein and lifestyle shift towards vegan diets. 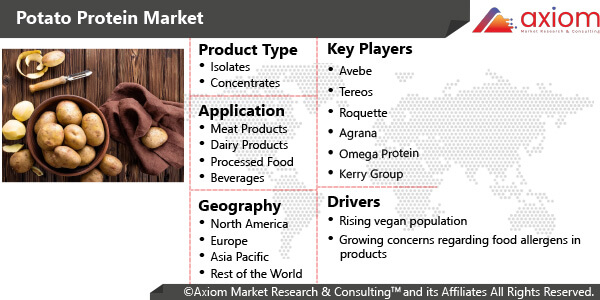 The global potato protein market is classified by Product Type, Application and Geography.

By type, this market can be segmented into isolates and concentrates. Extracted by specialized technologies, the protein composition of the isolate is said to contain somewhere between 90-95% amino acid concentrations, along with high bioavailability and solubility. It is also projected to grow at the highest CAGR during the forecast period. This is resultant to the high consumption of concentrates in the feed industry. Also, the market is dominated by the concentrates segment because potato protein isolates are still in the development phase and find use in food applications and others.

Based on region, this market is segmented into North America, Europe, APAC and Rest of the World. North America majorly contributes to the market due to the growing consumer awareness on the effects of animal proteins and increasing demand for gluten-free products. With increased demand for functional proteins and consumer health and safety concerns, Europe has the second largest market for potato protein. European consumers will continue to adopt potato protein in their dietary lifestyles. In addition, several potato protein market players are based in the UK, Spain and other parts of the Europe. Asia-Pacific is expected to be the fastest growing region with its rising population, changing lifestyles and investments from multi-national industries.