Cheese is a major source of calcium, fat, and protein covering large amounts of vitamins A and B-12, together with zinc, phosphorus, and riboflavin. Cheese produced from the milk of 100 percent grass-fed animals is maximum in nutrients and also comprises of omega-3 fatty acids and vitamin K-2. However, Cheese encompasses lactose, a sugar that hard to digest by lactose intolerant people as their bodies lack the enzyme that breaks it down. In such situations, consumption of lactose to a large extent can lead to digestive problems including gas and bloating.

The North America cheese market is witnessing convincible growth due to the wide consumer base, on-the-go lifestyle of consumers and increased demand for unprocessed cheese in the region. Moreover, the easy availability of the product and new flavor innovations are anticipated to strengthen the demand for cheese in the upcoming years. Furthermore, presence of the key market players in this region drives the market. 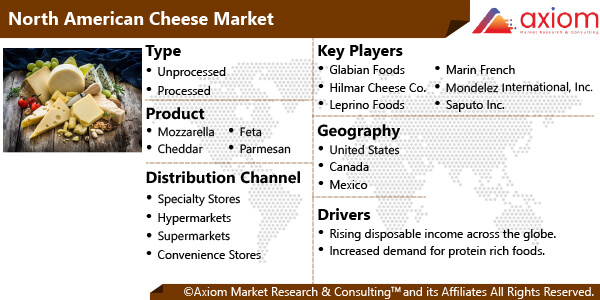 Mozzarella, Cheddar, Feta, Parmesan, Roquefort are the major products of North American Cheese. Mozzarella cheese is likely to dominate the market over the estimated timeframe. Apart from its usage in pizza, mozzarella cheese is used in a number of products and is well accepted with vegetables. Mozzarella cheese is also used in baked goods, Italian dishes etc. However, cheddar and parmesan cheese are also anticipated to be growing at a moderate pace over the forecast period.

The major distribution channel through which cheese can be accessible in North America are Specialty Stores, Hypermarkets, Supermarkets and Convenience Stores. Supermarkets followed by convenience stores are likely to dominate the market by distribution channel. Numerous options to choose and ease of accessibility are some of the factors dominating the segment. However, specialty stores are also anticipated to grow rapidly during the forecast period.

Geographically, the market is studied for The United States, Canada and Mexico. The U.S. is likely to dominate the North American Cheese Market owing to rapid urbanization, acceptance of ready-to-go products, mounting demand for fast foods and existence of major players in the country. However, Canada market is anticipated to grow rapidly over the estimated time frame because of the rising disposable income and shifting consumer preferences towards vegan cheese.