Viral vector is the most effective means of gene transfer to modify specific cell type or tissue and can be manipulated to express therapeutic genes. Several virus types are currently being investigated for use to deliver genes to cells to provide either transient or permanent transgene expression. These include adenoviruses, retroviruses, poxviruses, adeno-associated viruses, baculoviruses, and herpes simplex viruses. The choice of virus for routine clinical use depends on the efficiency of transgene expression, ease of production, safety, toxicity, and stability. Furthermore, many types of viral vectors have been used in a wide array of basic and clinical studies, and genetic tools made possible to construct novel viruses intended for gene therapy, but also the development of vaccines. Moreover, in gene therapy, viral vectors can be applied to treat different diseases such as, metabolic diseases, heart defects and neurodegenerative disorders. Additionally, in vaccinology, a growing level of information supports recombinant viral vector usage as a means of vaccination. Studies have demonstrated that, when antigen-expressing viral vectors are used, the elicited T- and B-cell responses are both wider and of a greater order of magnitude than after DNA immunization alone. Owing to various applications, the Viral Vector Manufacturing market is expected to propel in near future.

The viral vector manufacturing market is driven by key factors such as rising prevalence of genetic disorders, cancer and infectious diseases, advancement in biotechnology, diagnostic research & pharmaceuticals and ongoing research into viral vector-based gene and cell therapies. However, huge cost associated with gene therapy and short shelf-life of viral vectors are some of the factors hampering the market growth. 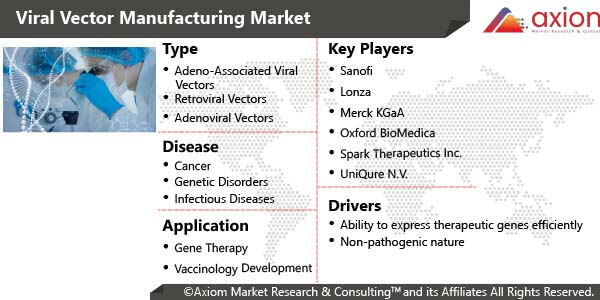 The disease discussed in this market are cancers, genetic disorders, infectious diseases and other. Cancer segment accounted for the largest market share in 2018. Its large share can be attributed to growing research on viral vector gene therapies for cancer.

Various application are studied in this report such as gene therapy and vaccinology. Due to increase in the number of gene therapy clinical trials conducted for chronic diseases such as cancer, cardiovascular diseases, and neurodegenerative diseases globally, the viral vectors are largely used in gene therapy segment.

April 2018: Lonza opens the world's largest dedicated cell-and-gene-therapy facility, which was built in anticipation of the rising demand from developers of cell and gene therapies,  the next era in medicine and with the mission of enabling them to deliver these types of treatments to patients around the world more quickly and efficiently.